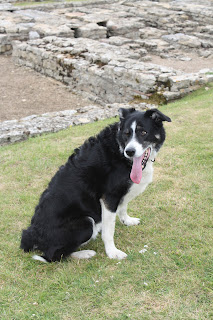 It was so misty when we set out for the Roman Villa at North Leigh (ten miles west of Oxford and two miles north of North Leigh, off the A4095), that I didn't bother to take my camera which means I lost the chance to take some enchanting shots of the sun suddenly piercing through the mist, filling the world with a golden glow. I offer this photo instead which was taken when Pythius and I walked this way last year.
First we visited the Swan Inn - Long Handborough which was renovated a couple of years ago by Steve Chick who managed to give it a new look, yet retain its rustic charm. During the renovations an old fireplace which had been hidden for more than a 100 years was uncovered, also a bricked up window.
The food is great, the menu offers a choice of several different steaks, home-made beef and beer pies, fish and chips and omelettes and sandwiches too at lunch time.
The Windrush Rambler's lunch which is a plate of home cooked ham, mature Cheddar cheese and crusty bread being the most popular choice for folk like us who aim to walk to the villa and then amble along the banks of the Windrush. Delicious beers from the nearby Hook Norton Brewery are always on tap.
The walk to the villa begins by taking a track opposite a lay by on the A4095.  After walking about 600 meters you will discover the villa laid out on the left hand side.  The villa it is known for its exquisite mosaic floor that is now covered with a roof to protect it from the elements.
Some of the mosaics are thought to have been created by Cirencester workers who have supplied mosaics to other villas in the Cotswolds, including Cedworth.
Entrance is free.
Having visited the villa, walk on down the track which opens out into a large meadow, then follow the bends of the river.  It ventually leads to a little bridge.  Cross this then turn left and you enter Stonesfield Common where dogs can run and run.

Pythius says;
I adore this walk during the winter when the meadows are devoid of livestock and I am allowed to run free, jump into the river and have the time of my life.  Not so sure I am into visiting villas, but I go along with that if it keeps Helen happy.