A walk round Pinsley Wood.

Today we had planned to walk along a small section of the Shakespeare Way, but everything went pear-shaped and we had to change all our plans.

Had the pub, that stands close to the walk, opened at noon as advertised all would have been well – but it didn’t. We spent more than half an hour sitting outside waiting for it to open  along with a group of walkers and several thirsty locals who were also congregated outside wondering what to do.

As I was judging a local food and produce show at 4pm, there was no time drive further afield and pick up the Shakespeare Way at another point.
Having been forced to pose for pictures outside the pub (which will remain nameless), Pythius was getting impatient, all he really wanted was a walk.

In the end we stopped off at one of our favourite local pubs, The Chequers Inn at Cassington, where dogs are always welcome. Auntie Liz and I munched our way through a couple of juicy rump steaks, then headed for Pinsley Wood.

We love this place as it is one of the few remnants of the ancient Wychwood Forest, which once covered a substantial part of Oxfordshire. It has a mystical atmosphere, which for reasons I don’t quite understand seem to appeal to Pythius.

I don’t know why the girls made such a fuss when they found the pub was closed. I know that they go to great trouble to match a pub with a walk – but surely they know by now this is not always possible. Pubs are closing at such an alarming rate, that soon they will have to pack a picnic and forget all about visiting a pub before the walk.


Helen, forgot her frustrations and became quite excited when we reached the wood as she discovered a great assortment of Autumn fungi nestling amongst the fallen branches and moss. Auntie Liz and I went off to play ball, leaving her kneeling down examining the toadstools and things and then photographing them. 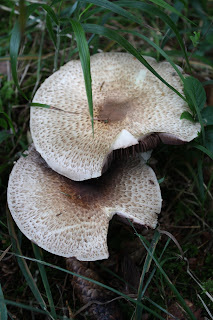 And yes, as we chose a walk close to home, she got to the village hall in good time to judge all those cakes and vegetables.

These are some of the pictures that Helen took while Auntie Liz and I had fun in the woods.
She has no idea what these amazing  growths that stick to decaying pieces of wood, or simply errupt from the earth are called - but they certainly fascinated her.
Please note we did not take any home for tea1 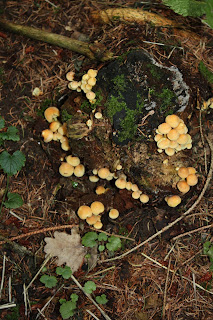 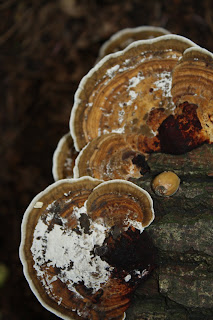