The sun was shining, the day was warm, yet had a definite autumnal feel - in otherwords it was just the sort of day to take to the hills. We chose the White Horse Hill and a Ridgeway walk which took us to Waylands Smithy - a late Bronze Age Long Barrow that can be found just west of Uffington Castle and the White horse.
We enjoyed lunch at the White Horse Inn, Woolstone, which welcomes well behaved dogs who place their paws under the table. Built during the Elizabethan period, this imposing white building, trimmed with beams is considered one of the oldest inns in the country. This suggests it is a pub not to be missed, as it is as saturated in history as the ground on which it stands.
Woolstone was once known for its abundance of wells and which produced crisp clean water.  Indeed legend suggests that the water was so pure that the White Horse would get up from its hillside retreat occasionally to drink from the water at the Woolstone wells. 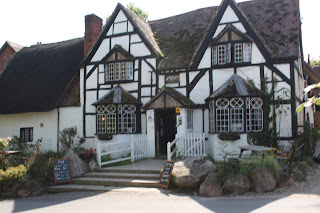 Unfortunately we miscalculated the weather, which turned so warm that Pythius was forced to take a cold bath in a puddle that he found along the way.

We began our walk after parking in theNational Trust's car park that leads to the Ridgeway. This cost £2 for a four hour stay, but that was OK as it is the only place you can park in the area, unless you leave your car in the pub's carpark and are prepared for a road walk of at least a mile.
I  have no need to give directions for this walk, for having left the car park and turned left and walked on until you hit the Ridgeway, which is an ancient road that has been walked for centuries, there are ample way signs at every point of the way. 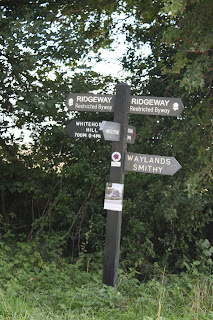 The Wayland Smithy is about three quarters of a mile along this section of the Rideway, having turned right. You can't miss it.
This ancient place, which is surrounded by trees, had a weird effect on Pythius - he was certainly not happy about being there.  I did manage to get him to pose with me for one photo, but even that was not easy.I was reduced to shouting at him  That was a mistake, Border collies don't like being shouted at. Besides, behind the  long barrow we encountered a lovely young woman poet sitting under the trees recording the gentle rustling of the leaves - the last thing she needed was the interuption we created. On discovering her there, I apologised about the language I had used to get Pythius to pose, and soon discovered she had been commissioned by Radio 3 to create a sound poem that captures the essence of  White Horse Hill, which will be aired next year. 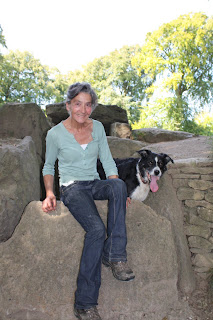 When I explained I had shouted as Auntie Liz was trying to take a photo of Pythius and me that might be used in the next book Paws Along the Way, we both laughed about the various difficulties we encountered when attempting to get all we need from a walk.
On our return journey we took time to enjoy the spectacular views and the various wonders that Autumn brings - the blackberries, the bright red hawthorn berries and the rose hips, counting ourselves among the lucky ones given that we are able to escape easily to routes our ancestors walked thousands of years before we were born.
Pythius has something to say:
All I have to say is why oh why didn't Helen take me on a river walk? It turned into such a hot day  I was reduced to sitting in a puddle to cool down - not  a very dignified pose for a Border collie. And as for suggesting I relax in that spooky place filled with stones - couldn't she see that it was freaking me out? Yes the poet lady was really lovely, she seemed to understand that Helen had to shout at me - but I didn't. Gosh I was glad to get out of that place.
Posted by Helen Peacocke at 05:03