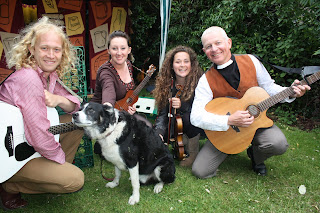 Despite the winter chill in the air Pythius and I did an extra walk today which took us to the beer garden of our favourite Eynsham pub - The Queen's Head, Queen Street. We were there to watch the Mikron Theatre Company's production of Beer Street, which proved a heady draught of people, pubs and brewing. In fact almost everything that interests dog and I.
When they learned that Pythius is a fully paid up member of CAMRA and also a member of the British Beer Writer's Guild, they asked him to join them before the curtain went up.

Pythius says: During the summer months this fascinating little theatre company travel the waterways to bring original and accessible theatre to villages such as Eynsham that are close to the Thames or the Oxford Canal. It's jolly good entertainment, I certainly enjoyed it, so do look up their website and check in case they are travelling in your area this summer.