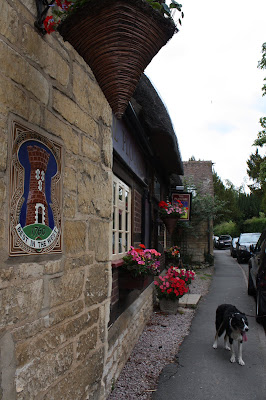 Prestbury - the Plough Inn - Three and a half mile circular walk

Perhaps we shouldn't have chosen Pestbury, near Cheltenham for our walk as my Border collie Pythius doesn't like ghosts and this delightful little Cotswold village is reputed to be the most haunted place in England, but we took him anyway. We even left him standing outside The Plough Inn, Mill Street, at the point where the ghostly galloping horses are said to pass by. Poor little lad, he just stood there waiting for something to happen - but it didn't - so we all went inside for lunch.


Although the main bar of this 17th century thatched pub has a great olde-wordly atmosphere we ate in the garden which judging by their accents and well-cut garments, was filled with members of the Cheltenham set. The food was freshly cooked and scrumptious and served by a charming young barman who kindly checked to see if Pythius would like a bowl of water. Several of the men-in-suits smile at Pythius when he curled in a comfortable position under the table while we ate. It proved a very friendly pub.

Having parked the car in a free car park just off Mill Street and close to the pub, we turned right into a small road called The Bank and right again into Mill Street, then turned left until we reached the B4632 , then left again, walking for about 100 yards until we spotted a stile and Way marker the other side of the road. Despite being a B road, the B4632 is busy. Crossing demands vigilance, a tight dog lead and loads of patience., but we made it and having climbed the stile we followed a well worn track and headed for Queen's Wood which is straight

ahead and easily spotted. The path alongside the wood now bears slightly left when it reaches the third field. Long horned cattle and loads of sheep will greet you as you pass this way. Before reaching the main road again we stopped to admire Cheltenham's famous race course which comes into full view on the left.


After crossing the last stile next to the main road (one of three that had an ingenious dog-friendly entry, operated by pulling up a plank of wood to enable dogs to clamber through) we faced the daunting task of getting safely over the road.


The medieval buildings of the De La Bere Hotel, which dates back to 1486 and is reputed to be haunted, now comes into view. One look and it is easy to see why. It is a magnificent old building but definitely looks rather spooky. 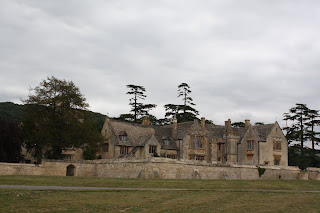 We followed Southern Lane, turning left after about 200 years into a field, with the hotel on our left. Keeping the hedge on our right we followed the track to a bridge-stile and eventually a minor road that was to finally lead us back to Mill Street.

Pythius Says: Once we got back to the village Uncle John and Helen dragged me through the streets, first stopping to view the Old Post Office which is now a news agents where a poltergeist is said to move things about. They then went on to the Old butchers Shop which is supposed to be haunted too. Anne Good Close was next as a little old lady is supposed to peer out of he windows. At each building they commanded me to sit and just watched so see if my fur went all prickly. But it didn't. There was no ghostly figure dressed in black in the church yard, no galloping horses outside the pub - nothing at all. I was however slightly concerned about the horned cattle we passed when walking towards the wood and the young bullocks we met towards the end of the walk, well the best said about them the better. Gosh Helen is a wimp! The pub was fine, I was welcomed and offered water - so all was well.
Posted by Helen at 03:10 No comments: