Woodchester Park - One and a half mile circular walk

We had travelled more than 50 miles to get there, but be assured the effort was worth it, as the The Rose and Crown, Nympsfield, transformed us into the magical world of Ambridge, a village familar to BBC Radio 4 listeners. Nympsfield is a charming little Gloucestershire village located six miles south-west of Stroud on the path of an ancient Roman Road. Ambridge however is situated in the fictional county of Borsetshire and can be visited nightly at three minutes past seven by tuning into Radio 4. So what is the connection? Why was I so excited to be sitting in the main bar of the Rose and Crown, a 400 year old pub built from Cotswold stone, which dominates Nympsfield's main street? Think Brigadoon and you have the answer. Brigadoon was the Scottish village in the musical of that name, which came to life once in every 100 years. Nympsfield is the place that transformed itself into Ambridge for just one day. July 6 1985 to be exact. When dusk settled that day, and the 800 year celebrations commemorating the appointment of the first vicar of the parish were over, the residents removed the signs they had put in place for the day everything went back to normal. The sign of The Bull was taken down and the pub became the Rose and Crown once more, the Ambridge Village Store sign was removed, so was the Gray Gables name that had been stuck to the entrance of local convent. All that remained at the end of the day to remind the residents that they had lived in Ambridge for just 24 hours were the memories.


One visitor that day was my friend the late Mollie Harris who played the Archer's character - Martha. She and other Archers characters had been invited to join in the celebrations, and add an air of authenticity by entering the village on a horse-drawn brewery dray. She mentioned this visit in her book The Magic of the Cotswold Way. It was for her an unforgettable memory. 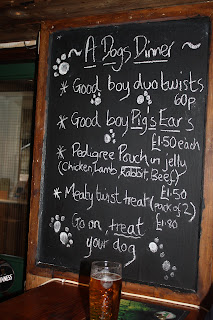 It was for Pythiu, Uncle John and me too. The Rose and Crown, with its small restaurant at the back and its rustic feel, hop flowers decorating the beams, could have easily been the Bull. Indeed I half expected to be asked if we wanted a pint of Shires - but we weren't of course, though we were served by a charming young woman who brought water for Pythius without being asked.

Perhaps the thing that sets the two pubs apart is the Dog's Dinner Menu Board by the bar. I doubt The Bull would have offered a Good Boy duo twist, a pig's ear or a Pedigree pouch of chicken, lamb, rabbit or beef. Pythius ordered a pigs ear and loved it. He has never been offered choice from a dog's menu before. It made him feel very important, so did the locals congregated by the bar sipping their real ales. They called him a splendid Border collie, tapped him on the head and watched him eating his dog's dinner. It was all great fun.


The Walk: Woodchester Park is owned by the National Trust and is just a mile from Nympsfield, four miles south west of Stroud and off the B4066 Stroud to Dursley Road. It is a glorious secluded valley with a mansion and a chain of five man-made lakes fringed by woodland and pasture. The thing I liked about this park is that there are three different, clearly marked walks.

The Woodland Walk that takes you to a high point and close to the Mansion which is just 1.7. miles long, and marked by blue arrows. The Boathouse Walk marked with orange arrows that is 3.5 miles long and the Valley Walk marked with red arrows, which is 7 miles long and explores the lakes and more woodland, with viewpoints that offer a glimpse of the Mansion. Having eaten so well at the Rose and Crown Inn, we went for the first walk, and gently ambled along a wood-lined path, past remnants of the old ice house. As it took us close to the Mansion which is a Grade 1 listed building built in French Gothic revival style from Cotswold limestone, we made a short detour to view it. Apparently the work on this building took so long that in 1870, after 16 years work, the workers left, leaving their tools behind and many of the rooms unfinished. Inside there are doors that lead no where and corridors that still end abruptly. The Mansion trust that owns it is now using trainee craftsmen to undertake repairs and preservation.
It was whilst taking a small detour to view the Mansion, which is only open to the public a few days every year, we met up with the most delightful couple, who like us, were enjoying the peace of this glorious park and admiring the wonders of this unfinished masterpiece. How I would like to give you their names, but am ashamed to say I lost their email address. It's my hope, that on reading this they will make contact again.

Pythius Says: There are times when I reckon my mistress is barking mad. How can a supposedly intelligent woman like her travel all the way to Nympsfield just because once a long time ago the residents put up a few signs and pretended it was somewhere else?

Living with her is not always easy - it is fun though and I must admit the joy she seemed to get from sitting in that pub was something I couldn't deny her. Besides, this pub had a dogs dinner menu. Fancy me, a Border collie being offered lunch! That has NEVER happened before. And the walk, short though it was, took us through the most beautiful wooded countryside full of glorious smells. I had the time of my life in that lovely park. I just wish Helen had chosen the seven mile walk rather than the short one though, then I would have seen the lakes and perhaps been given the chance to swim. Oh well, I guess I can't have everything.