The Wysis Way, Kemble and The Tavern Pub

The Wysis Way, Kemble and The Tavern pub.
Two mile walk taking in The Wysis Way and Thames Path
You willl find Kemble by travelling the A429 - between Cirencester and Tetbury.


This delightful two mile walk began and ended at the Kemble Railway Station car park which stands close to the Tavern pub, built in the mid 19th century as a tavern for rail workers and travellers.

The Wysis Way links Offa's Dyke Path with the Thames Path, providing continuous walking for more than 400 miles from North Wales to London. We just walked a couple of miles - but who knows, we may walk further another day.

Our first mistake was to assume that Ways never change. Uncle John, Pythius and I spend some considerable time walking backwards and forwards through a newly built estate looking for the path. The Ordinance Survey map said one thing - the newly built houses with their twisting lanes that led nowhere, suggested another. In the end, having asked a couple of locals for directions, we walked back to the station, then trotted down Station Road, which led us to Windmill Road, then turned left, walked a few yards more until we discovered the Wysis Way marker on the right hand side of the road. Thereafter it was simple as the Wysis Way joins the Thames Path at this point, so all we had to do was follow the river and the Thames Path way markers, until ready to follow footpath signs back to Kemble.
One snag however - the river bed was dry! This did not please Pythius!
Pythius will take over the story at this point:
"Oh dear - I had been promised a river walk, and what did I get?  A dry ditch, no water, not a drop, nothing but stones and more stones.
Yes, there was watercress flourishing in abundance, but NO water.  I jumped up and down the bank, assuming that water would appear eventually. It didn't - nothing happened,. So we just walked on and on, through a couple of fields, until we joined a very busy road. The road freaked Helen out as she had forgotten to put me on the lead.  I've no idea why she should panic so, she should know by now that I respect speeding traffic and would never walk unescourted out on to a busy road.  Two fields later and we were back at Kemble again, weaving our way in and out of houses, past the little school and the village hall, and back to the pub, were a bowl of cold water was presented to me within moments of placing my paws under the table. 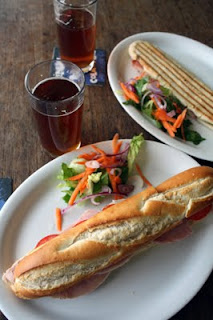 Helen and Uncle John tucked into a couple of filled rolls which looked delicious, while I relaxed under the table.
Their beer smelt good (Gosh how I love the smell of malt - why they  don't let me have a bowl of beer I will never know, afterall I am a member of CAMRA and have my own card that identifies me as a member of the Britissh Beer Writers Guild)  But they don't.
The Tavern is an Arkell's pub, so they were drinking Moonlight, which gives off the most delicious toasty aromas.
Helen's notes:
Kemble is but two miles from the source of the Thames, which would explain why Pythius did not find the kind of river he had expected at this time of the year when the water table is low. Had we walked further down the Thames path no doubt we would have encuntered a point where one of the many tributaries that flow into the Thames was in full flood. But we didn't.
While at Kemble, it is worth  taking a look at the historic railway station designed by Isambard Kingdom Brunel in 1845 - it is a glorious little station - totally unspoiled and very atmospheric.